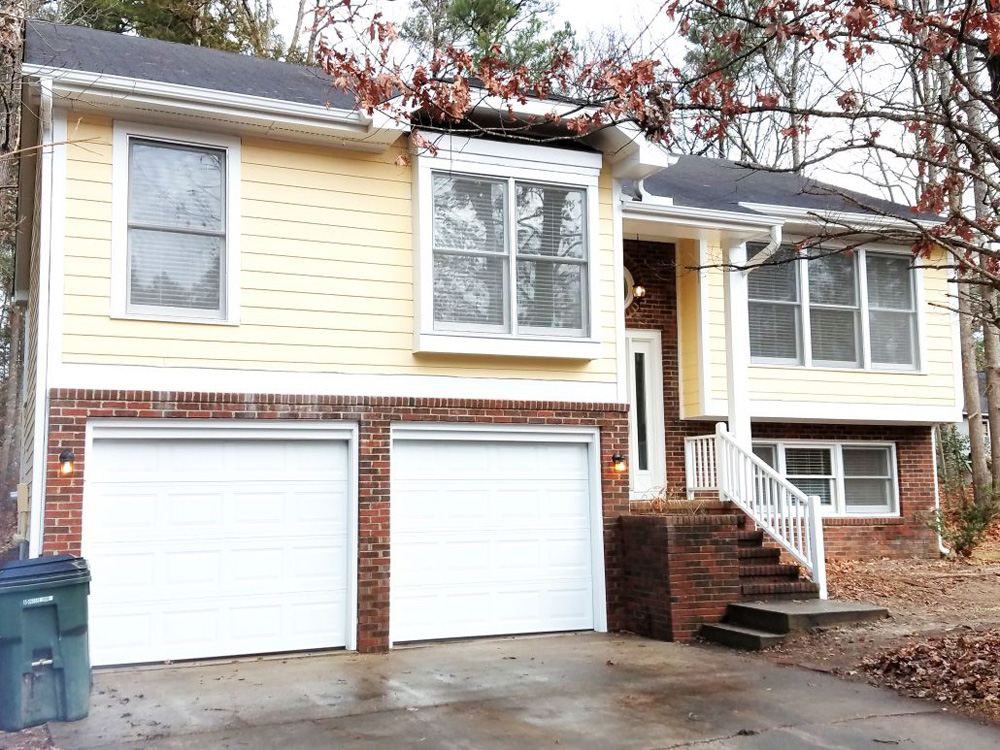 Blue Chariot has completed another rehab to rental project at: 56 N. Wycliff Drive, Durham, NC 27703. This was originally a Split-Level (3 Bedroom / 2 Bath + Unfinished Basement) House in the Greenwood Community (off N. Mineral Springs Road and Tyne Drive), that was bought as a foreclosure – but with a serious structural defect present…

The nature of that defect was that the deck was built without proper flashing, creating a situation where over the course of many years – rain runoff from the deck directly against the side of the house (due to no flashing) caused the support structure to rot and the upper floor began to collapse into the basement at the sliding glass door leading to the deck. This created an un-safe structural condition, preventing the home from being purchased by most intended owner-occupants with conventional bank financing, as most banks won’t finance the purchase of a house that is in a non-livable condition. As such, this house could really only be purchased by someone having the cash or specific rehab funding and experience – like Blue Chariot!

This Wycliff House was purchased in mid-July of 2017, but because of other Blue Chariot projects already underway, it sat for 3 months before the project began in October – during which time architectural plans were drawn for the basement.

Once started, the first step was to fix the structural issue, which involved removing the deck and a window in the basement that (for some reason) was under the deck. As we saw no need for a basement window with an underside deck view (also creating a hidden spot for a potential break-in), we replaced the window with wall framing and siding, and cut a new window into the side basement wall – then built a new deck. We also replaced all rotted wood in the basement and the deck sliding glass door.

All total it cost about $7,000 to remedy the structural issue (plus new deck, sliding glass door and basement window), which was a reasonably small part of the total rehab budget for the whole-house project – most of which was devoted to finishing the basement into a 4th Bedroom, 3rd Bathroom, Bonus Room and Utility Room. Further, this structural condition resulted in a purchase price discount on the house that was over 5 times the amount it cost to fix it – because twice before the house had fallen out of contract with an intended owner-occupant when their bank refused to fund the purchase for this reason.

The Basement now has a 4th Bedroom with a window bringing in sunlight from the side of the house, instead of an under-deck view. We added: 3rd Full-Bath w/Shower & Linen Closet (breaking concrete to extend pipes); Bonus Room; Utility Room (with W/D Hookups); and Storage Closet (containing HVAC & WH).

Upon exiting the Basement is another Storage Closet and a door leading to the Garage (with two new Garage Doors), along with the stairs leading up to the entrance door and then up again to the main level. On the main level, the Livingroom with wood-burning Fireplace again has “Luxury Vinyl Plank” Flooring (throughout) with Carpet in the three upper Bedrooms and stairs, plus “Vinyl Tile” in the two upper Baths. All three upper Bedrooms and Livingroom have new fans and all internal and external light fixtures throughout and around the house have been replaced and upgraded. And all windows throughout have Faux-Wood Plantation Style Blinds and new screens.

We painted the inside our normal color (Pumpkin Seed) after repairing all the interior wall damage (many holes big and small) and prepping the wall paper in kitchen and baths to be painted over. We fixed all the ceiling, trim and door frame issues and painted these white. All the doorknobs and light / outlet plates were replaced.

The outside was painted a yellow tone similar to the original color – after replacing all the exterior rotted wood, damaged siding, and new gutters all around. There was also some roof damage that needed to be repaired (rotted wood), which was done along with replacing both of the skylight domes in the livingroom (that were cracked). Plumbing and Electrical work was needed throughout the house, in addition to new work to finish the basement. In the kitchen, we repaired and resurfaced the original wood cabinets to white, and added stainless steel appliances along with matching door handles and lighting fixtures. We also resurfaced the upper bath vanities to a matching white color.

The Wycliff House would certainly make a good “Flip” (if keeping as a Rental was not preferred), but our business model focuses primarily on “Buy & Hold” investing, so we are now renting this home on a 1-year lease. There are other rehabs underway in this area, as well as, new build construction nearby, so we may choose to sell it next year via a “1031 Exchange” – if sales activity (comps) push the value significantly higher. However, we will likely just do a cash-out refinance to capture profit and keep it permanently as a positive cash-flowing rental. If we did sell, we would add a few more enhancements, like new granite or quartz kitchen counters and bath vanity tops – but it was not in the budget for a rental for which the existing kitchen counters / sink and bath vanity tops were in acceptable condition.