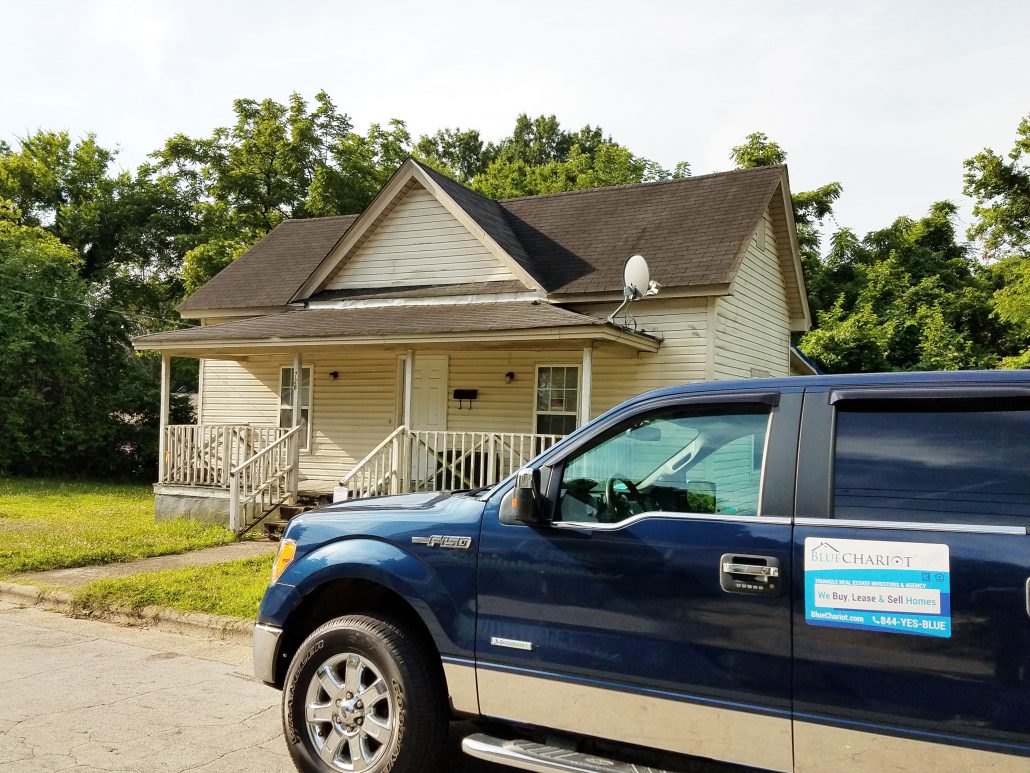 Blue Chariot has purchased the home at: 728 Hopkins Street, Downtown Durham, NC 27701 – for our next rehab project… This is a 4 Bedroom / 2 Bath, Ranch Style Home of approximately 1400 SqFt, originally built around the year 1900. We’ll be doing a full-gut rehab on this property – to make it AMAZING! The Downtown Durham area is undergoing a grand revitalization, so we’re excited to make our mark on Durham with our first Downtown project.

Hopkins Street lies between N. Elizabeth Street and N. Alston Avenue (Hwy 55), just behind the Golden Belt Arts Campus off E. Main Street near Downtown Durham. North Elizabeth Street boasts a multitude of successful rehab projects, along with others at every turn in this area.

This is the BEFORE…

We’ve started the demolition @ 728 Hopkins Street, Durham, NC 27701 – after a month long delay for permits and clearance of existing (pre-purchase) property condition violations from Durham Neighborhood Improvement Services. DNIS is very particular about Downtown Durham properties in general these days, but especially this property – which sits right behind their office location in Golden Belt. While the demo proceeds, we’re working with our architect and contractor to finalize the plan – for what will be an amazing rehab!

As an update on this project… As we got further into the job we encountered several unforeseen issues that started to increase our rehab costs considerably. It eventually reached the point where it would have been cheaper to just knock it down and build new, and since we had no experience with a knock down / new build construction project – we found someone who did and sold the property to them back in October of 2017 for $10K more than we paid for it.

Ultimately, with time and expenses up to that point, this still resulted in a loss of about $5K; however, it became the best $5K I’ve ever spent, as we learned a ton on this project that made the next 3 (Wycliff, Lee & Carver) possible. Further, here we built the team that have worked with us on each project since, and will continue going forward.

Especially true is that had I not taken on this project at 728 Hopkins Street, and gain the experience and lessens that it brought, I would not have been prepared for a project like the 813 Lee Street Duplex, which had both extensive fire / smoke and foundation damage. Or a project like 56 N. Wycliff Drive that had a structural issue where the upper level was collapsing into the lower. Or the most similar project to this one at 2500 W. Carver Street, which is another extremely old house with lots of surprises.

So, all-in-all – I do not regret purchasing 728 Hopkins as an attempted flip, and although we decided to hand this project off to someone else to handle, it was an extremely successful LEARNING EXPERIENCE. It also showed that we bought the property right, in that we were able to exit by selling for more than we paid.