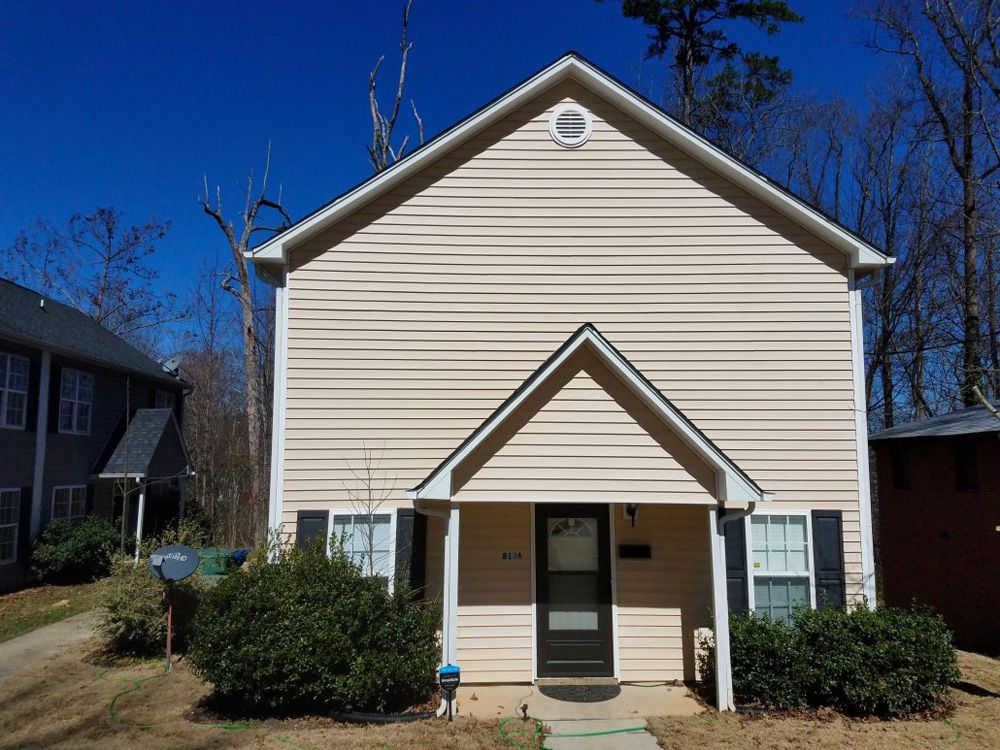 Blue Chariot has completed another rehab to rental project at: 813 Lee Street – Duplex (Unit A), Durham, NC 27701 – which is located off North Alston Avenue near Geer Street. This Duplex was acquired as a foreclosure and contains two (3 Bedroom / 2.5 Bath) Units in a Townhouse style layout – constructed in 2007. See the separate post on Unit B of this Duplex.

The Front (A) Unit had extensive smoke and fire damage that appeared to originate in the lower half-bath. The smoke damage encompassed both levels, with the ceiling completely coated in soot to the point where it looked to have been painted black.

Many of the doors and window were damaged or broken; and the exterior components of the HVAC system were missing. There were also several large cracks in the slab foundation that extended from the Back (B) Unit, where the foundation damage was much worse.

This project began with demo to remove all ceiling drywall from both levels, remove the top half of drywall from the lower level walls and replacing all charred wood in and around the lower half-bath. With this done, everything that remained was thoroughly cleaned before being coated with an Odor Blocking Primer designed for remediation of smoke damage.

Finishing touches included: Door Knobs; Door Stops; Smoke & CO2 Detectors; Motion-Activated Security Lighting – and the Lower Bath needed new Vanity, Toilet, and Fixtures. Also required was Electrical and Plumbing work related to the fire damage; as well as, two new Sewer Pumps needed to get waste up the hill below which the building sits. There was also exterior work to replace damage shingles and roof boots, pressure wash, trim trees and bushes, pickup trash and debris, etc… We also added a Retaining Wall to the back right corner and a French Drain System with all gutters tied in, routing water down the hill behind the building to prevent future foundation issues.

As is the case for most of our properties, we added a SimpliSafe Alarm system that is optionally available to the tenant with monitoring @ $30/mo. Both Units of this Duplex were rented prior to the rehabs being completed, and they are now occupied.

This property was purchased in November 2017 and the rehab began the following week. It was completed by mid-February, so this was a rehab of approximately 3 1/2 months.