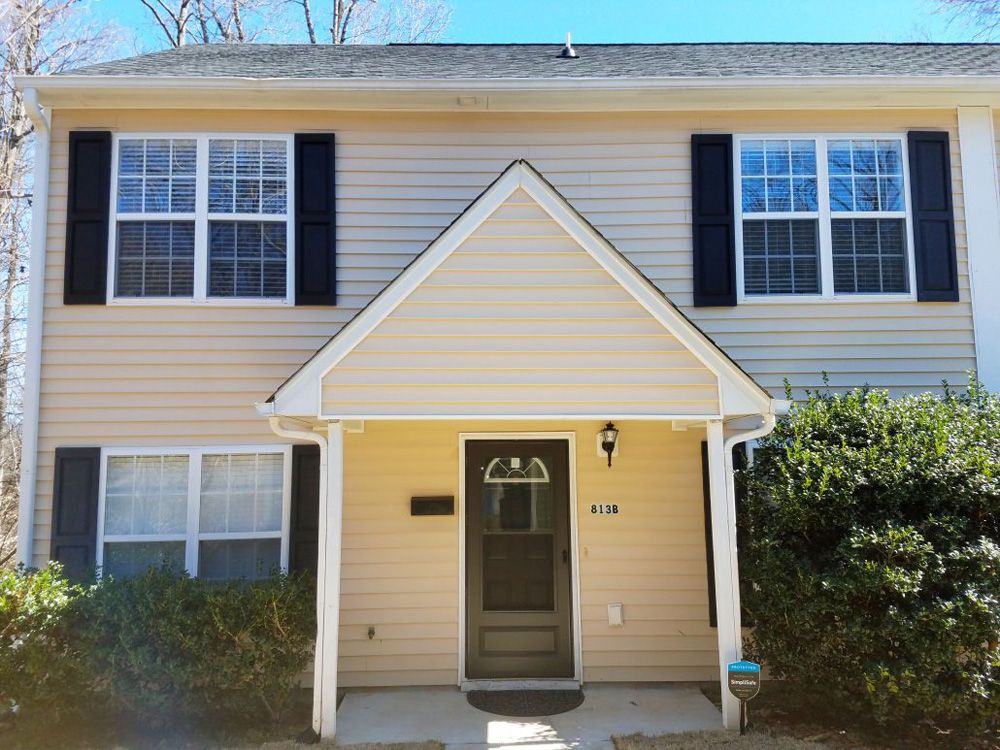 Blue Chariot has completed another rehab to rental of a Duplex at: 813 Lee Street – Unit B, Durham, NC 27701 – located off North Alston Avenue near Geer Street. This Duplex was acquired as a foreclosure and contains two (3 Bedroom / 2.5 Bath) Units in a Townhouse style layout – constructed in 2007. See the separate post on Unit A of this Duplex.

The Back (B) Unit had the most severe slab foundation damage we’ve taken on to date, with 1 to 2 inch wide cracks running the distance of the lower level, including a crack along the back right corner that began a noticeable drop from one side of the kitchen to the other. The sloping could even be seen and felt from the upper level bedroom above the kitchen. Additionally, the doors and windows along the back and right side of the house had damage to the frames that prevented proper function.

So we started this project with foundation repair by Carolina Foundation Solutions, which included digging out the slab along the back and right side to install 6 Helical Piers to lift and stabilize the foundation. They then drilled several penny sized holes at various locations in the slab throughout the lower level of the building and injected a High-Density Polyurethane Expanding Foam to further stabilize and lift the foundation. In total, between the Helical Piers and Foam Injection there was about 6 inches of lift obtained. Next the cracks were sealed and edges ground down to smooth everything out as best possible before application of Floor Leveler.

Then all the door and window frames had to be adjusted / repaired or replaced to make aligned and fully functional. Further, several of the doors had to be replaced due to damage; and many holes and cracks in the walls and ceilings of both levels had to be repaired. Then we proceeded to paint and install flooring (Vinyl Plank in the lower level; Vinyl Tile in the bathrooms & Carpet on the stairs, upper hall and bedrooms). Next the new HVAC went in, as the exterior unit of the original system was missing (likely stolen), so a completely new system was needed to match components.

Finishing touches included: Door Knobs; Door Stops; Smoke & CO2 Detectors; Motion-Activated Security Lighting. Also required was a new Sewer Pump needed to get waste up the hill below which the building sits. And there was exterior work to replace damage shingles and roof boots, pressure wash, trim trees and bushes, pickup trash and debris, etc… Lastly, we added a Retaining Wall to the back right corner,  a French Drain System with all gutters tied in routing water down the hill behind the building to prevent future foundation issues, and new Bermuda Grass to further absorb water.

As is the case for most of our properties, we added a SimpliSafe Alarm system that is optionally available to the tenant with monitoring @ $30/mo. Both Units of this Duplex were rented prior to the rehabs being completed, and they are now occupied.

This property was purchased in November 2017 and the rehab began the following week. It was completed by mid-February, so this was a rehab of approximately 3 1/2 months from purchase to occupancy.